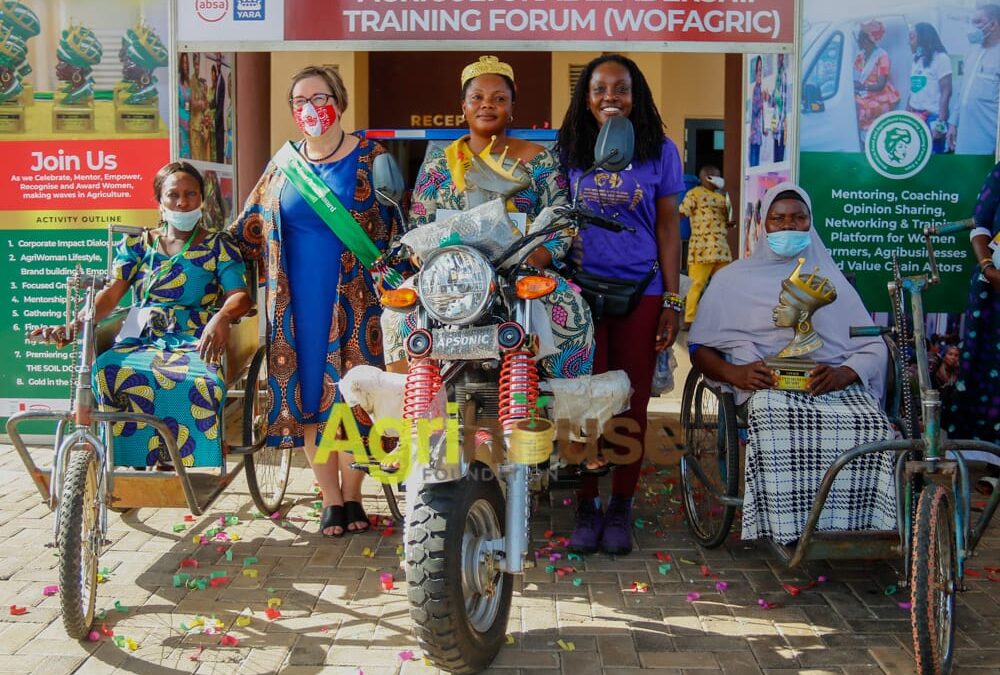 Executive Director of Agrihouse Foundation, Alberta Nana Akyaa Akosa Sarpong has noted that, this year’s Gold in the Soil Awards, has for the 1st time in four (4) years, received over 17 entries from women with disabilities, primarily from the Western and Western North Regions of Ghana.

Ms. Akosa Sarpong made this revelation at a Press Launch of the 4th women in Food and Agric leadership Training Forum and the Gold in the Soil Awards, held yesterday, at the Office of the Western Regional Minister, in the Western Region.

According to her, this is very positive and represents our efforts over past 3 years, to encourage and push for an all-inclusive approach, to build and inspire more women farmers with disabilities come out and be at the frontline, in building community agriculture.

In total, 82 entries have been received for the 16 categories, under the Gold in the Soil Awards, which is slated to hold on the 22nd and 23rd of June, 2022 at the Akroma Plaza Hotel, in Takoradi.

The Passion for Farm category, which goes to a woman excited and passionate about agribusiness and contributing to the growth of her community, received 17% of the total entries. Majority of the women who submitted entries for this very category are women farmers, in Sefwi Wiawso, Amenfi West, Jomoro Municipal, Wasa East, Shama Essumankrom, and Effia Kwesimintsim Municipal. They fall within ages 20 to 60 and cultivating a farmland of between 5arces to 35 acres.

The Foundation, she said, will also be paying close attention to women operating in the areas of climate smart farming, (CLIMATE SMART CATEGORY), the Lady of the Region Export Award Category and the “She-Operator Award Category”, which has over the years received the lowest entries, with only 2.5% of total women submitting entries this year.

This is an indication that, there is more room for improvement and some more work to do, and as a Foundation, we are looking forward to working, more closely with both the Private and Public institutions, development Partners and related agencies, to upgrade knowledge of women in agriculture, to enhance productivity, growth and expansion.

The remaining award categories, including Royal Agro Award, She Innovates, Outstanding Women in Extension Services, and Diamond in the rough Award, all received encouraging entries, between 10 to 18% nominations.

The Feed to Foods Awards, Star Woman Agripreneur Award, Princess Carla and Change Champion Award, all pulled off average numbers, between 8 to 10% nominations.

“Generally, we are satisfied with the balanced representation in the remaining categories; as well as the number of women farmers and Agribusinesses represented in this year’s nominations,” Ms. Akosa Sarpong said.

The ultimate Award, The Gold in the Soil Award received strong seven nominations, including 2 from women farmers with disabilities.  Over the last 3 years, the Award has been given to an outstanding woman in agriculture, producing along the entire agricultural value chain, from production through to processing, branding and marketing, among others. Importantly, her agribusiness should be making recognizable impacts on her community.

Last year Madam Portia Asumda, from Zangeyire in the Upper East Region won the category. She has been farming for the past eight years.

She is into shea-processing and crop production, and rearing of livestock. She works with over about two thousand agri-women across upper-east, west and the Tansi district. Under her leadership and coordination, they are able to process their sheabutter, which for some years now; they have had opportunity to start exporting to countries like the USA and Canada.

As the ultimate winner, Portia Asumda, took home a brand new tricycle, with support from the Canadian Embassy, to aid with transportation. She also received a Gold in the Soil Award plague, fertilizer bags provided by Yara Ghana, an irrigation pump, provided by Interplast and Peg Solar. She received a certificate of honor, a full piece of cloth and branded T-shirts from all the sponsors of the event.

For his part, the Western Regional Minister, Hon. Kwabena Okyere Darko Mensah, in a speech read on his behalf praised Agrihouse Foundation for instituting the WOFAGRIC and Gold in the Soil Awards, which he described a laudable initiative.

He said the Western region was ready to host the main two-day event, come 22nd and 23rd June, and further explore the partnership and networking opportunities the event has to offer the women farmers of both the Western and Western-North region.

Annually, the Gold in the Soil Awards moves from region to region, with the aim of celebrating, empowering, building data of women in agric, across the Regions, mentoring and increasing the participation of women in agribusiness. The award scheme has over the years, recognized the efforts of exceptional agriwomen whose contributions are significantly influencing the growth and sustainability of the country’s agricultural sector.

Their inspiring stories are featured in a documentary series produced by Agrihouse Foundation, to serve as motivation and encouragement for other women who desire to venture into the sector.

In the last 3 years, the event has been held in the Volta Region, Ashanti Region, Upper East and West Regions.  About 638 women have submitted entries, with 45 of them, receiving Awards under the various categories

The Gold in the Soil Awards is also part of the Women in Food and Agriculture Leadership Training Forum (WOFAGRIC). The two-part event, since inception, has brought  together, over 2000 women in agriculture, and stakeholders in government, policy and administration, development-partner organisations, Research, FBOs, Agric institutions, and resource persons, who support in the capacity building, training and mentorship sessions.

In the past three years, WOFAGRIC and the GOLD in the Soil Awards has developed and strengthened women in Agribusiness and exposed them to different and more recent approaches in handling their agribusinesses. It has nurtured and recognized the agribusiness community, where the sharing of business knowledge and industry innovations is at the forefront of helping women excel in the sector.

Collaborating Institution include the Ministry of Food and Agriculture (MOFA), Women in Agriculture Development (WIAD) and the National Farmers and Fishermen Award Winners Association (NFFAWAG) and the Western Regional Coordinating Council.