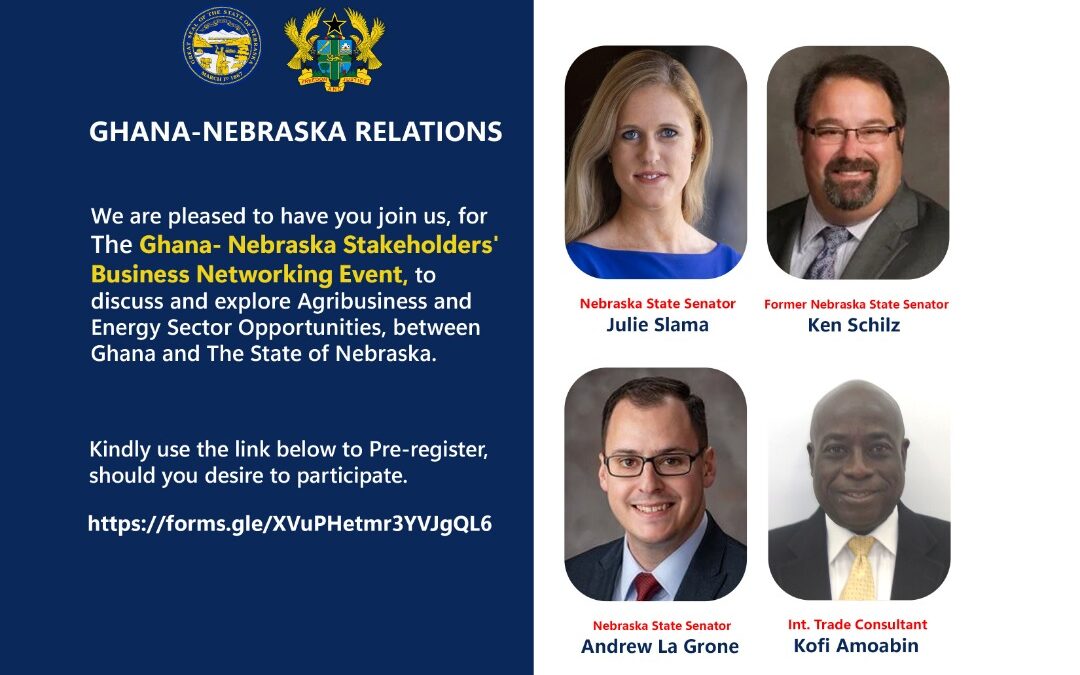 Three Senators from the State of Nebraska, United States of America, and an International consultant, are set to arrive in Ghana on Sunday, November 13, 2022, for a 5-day visit.

Their visit is aimed at working and developing business relations between Ghana and the State of Nebraska, with a focus on Agriculture, Agro Processing, Energy, Lands and Natural Resources.

In a press release issued by Agrihouse Foundation, the co-host of the visiting senators, described the visit as one that will create the much desired economic path opening up and deepening opportunities between Ghana and the State of Nebraska, especially for actors in the Livestock and Agro Processing sub-sectors.

The visiting Senators are upbeat about the immense mutually beneficial fallouts from their visit as they anticipate there will be more to learn about the Investment and Development opportunities in Ghana, especially through expected interactions with both the Public and the Private sectors’ key players, as well as through field trips for first-hand experience.

The visiting delegation of Senators include the twenty-five years old Julie Slama, who happens to be the youngest woman serving in the State of Nebraska.

Miss Slama made waves on the internet in early April 2022, when she took to the Nebraska senate floor to support the Human Life Protection Act. Earlier in the year, she had also introduced the Heartbeat bill, a bill to ban abortion after a baby’s heartbeat is detected. Her bills on agriculture, rural economic development, and education passed support.

She presently serves on several Executive Boards in Nebraska, including the Judiciary Committee, Retirement Committee, Banking, Commerce, and the Insurance Committee; and she is very passionate about causes and issues in the Health and Agriculture sectors.

Leading the delegation is former Senator Ken Schilz who served for eight years as a Nebraska State Senator representing ten counties in western Nebraska. He was elected Chairman of the Agriculture and Natural Resources Committees and served on the Banking, Commerce, Insurance, Business, Labor, Education, and General Affairs Committees. He is a Strategist who has, over the years, worked with various companies to create relationships with communities and other entities to further Economic Development, Entrepreneurship and Job Growth within the State.

Before serving in the Legislature, Schilz managed a 20,000 herd feed yard for 15 years. Presently with Nebraska Strategies, the former Senator is keen on sharing and leveraging on his experience to develop and strengthen Investment, Impact Projects, especially in Agro Processing and Value Addition.

Amoabin’s role as a consultant encompasses projects in the US, Germany, UK, Ghana, Nigeria, Cote d’Ivoire, Tanzania, Cameroon, Uganda and others.

The successful Consultant who once served as an election judge in Will County, Illinois since 2008 has, also, between 2013 and 2014, worked as News Reporter in Ghana when the candidate Nana Akufo-Addo challenged Ghana’s 2012 Presidential Elections.

Senator La Grone also led a filibuster that secured a vote on the largest property tax cut package in the State history. Prior to serving in the Legislature, Andrew served as the Legal Counsel for the Government, Military and Veterans Affairs Committee from 2016-2019, and on the Washington, D.C. staff of Congressman Adrian Smith. He graduated from the University Of Nebraska College Of Law with High Distinction in 2015, running his own Law Firm.

The leader of the eminent delegation, Senator Schilz, says that whilst in Ghana, they will also jointly launch, with Agrihouse Foundation, the “Nebraska-Ghana AgriValue Addition Acceleration & Development Conference” – NEGRI-VAD, an annual event, which aims to develop business markets amongst Ghanaian Value Chain Actors and businesses in Nebraska, United States of America.

“We are all excited about coming to Ghana and are confident that, by the end of our five (5) days visit, we should have been able to have met the right people, had a better understanding of the respective sectors and laid the grounds for the beginning of a Ghana- Nebraska sustainable relations,” he concluded. 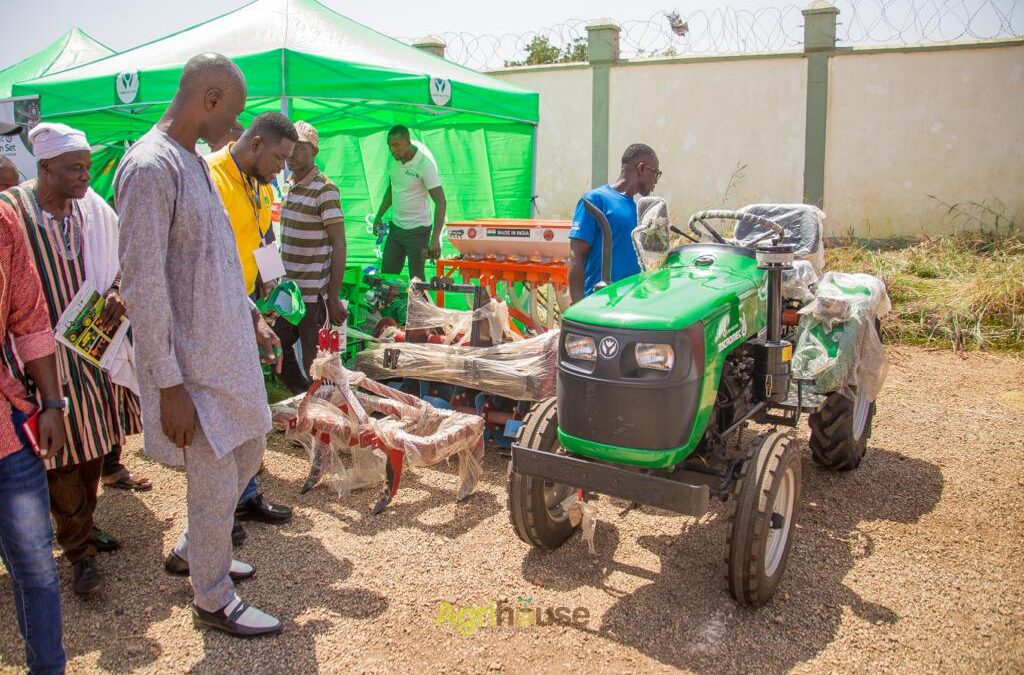 The event, currently underway is taking place at the Aliu Mahama Sports Stadium in Tamale with the aim of encouraging business partnerships.

It is in partnership with the Ministry of Food and Agriculture (MoFA), and Northern Regional Coordinating Council, with sponsorship from from Yara Ghana, Ecobank, Agricultural Development Bank and GIZ.

The exhibition has the theme: “Connecting the Unconnected – The Farmer, the Buyer and the Market”.

It featured over 100 dealers who exhibited agrochemicals, seeds and farm machinery and inputs.

Miss Alberta Nana Akyaa Akosa, Executive Director of Agrihouse Foundation, in her welcome address, said over the years, Agrihouse through the exhibition platform had linked small scale enterprises to buyers at local and international levels.

She said the platform had connected many agriculture value chain actors, generated substantial revenue, and urged participants to use the opportunity to build long lasting relationships with other businesses.

Mr Yaw Frimpong Addo, Deputy Minister for Food and Agriculture, said the Ministry acknowledged that pre-harvest conferences over the years had provided unique platforms for effective communication of plans and programmes.

He said agribusiness had also contributed to the country’s agricultural system, by eliminating gender biases, insecurity and promoting seasonal farming that had transformed and given practical meaning to agriculture in the country.

He stated that MoFA, since 2017, had set out strategic initiatives such as the Planting for Food and Jobs to tackle the fundamentals of agriculture.

He described the theme as apt and said poor market access during bumper harvest was becoming a major challenge militating against farmers in the country, adding that farmers would be disconnected from their markets if the situation persisted.

He urged stakeholders to invest in improving the state of market channels within the agricultural sector to halt challenges such as post-harvest losses, poor pricing and transportation issues.

He noted that as part of the Yara Grow Ghana initiative, the organisation would donate 300 bags of fertilizer each, to women in the Saint Cecilia Cooperative and the Northern Widows Association by the close of the event.

A pre-harvest agribusiness conference and exhibition, on the theme: “Connecting the unconnected: The farmer-the-buyer and the market”, is underway in Tamale in the Northern Region.

The three-day annual event, which is in its 12th year, began last Tuesday. It serves as a platform for the entire agribusiness eco-system in the north to dialogue and exhibit products.

It is being organised by the Agrihouse Foundation, an NGO, in partnership with ECOBANK, Yara International, the Ministry of Food and Agriculture (MoFA) and the Northern Regional Coordinating Council (NRCC).

A Deputy Minister of Food and Agriculture, Yaw Frimpong Addo, said the government was committed to ensuring a paradigm shift in agriculture from being a way of life to a serious business.

He said the government would continue to place emphasis on adding value to the country’s agricultural produce for export and local consumption to create wealth for farmers and jobs for the teeming youth.

“Agriculture in any form should no longer be constrained or limited by socio-economic, cultural and other factors.

“The ministry has been tackling the fundamentals through the introduction of new policy initiatives and strategies under the Planting for Food and Jobs, our flagship programme,” Mr Addo added.

He commended the organisers of the annual event, saying it set the agenda to reap the full potential in agriculture through the creation of market linkages for actors in the value chain.

The Chief Executive Officer of the Agrihouse Foundation, Alberta Nana Akosua Akyea, said the event had, for the past years, become a leading market linkage on the country’s agricultural calendar

It also created opportunities for direct members and partners of the agricultural community to come together through exhibitions, field and practical training and demonstrations, buying and selling, as well as networking, she said.

“I am happy to report that for the past 11 years, Agrihouse and its partners, through this platform, have been connecting and engaging the agricultural sector, linking small-scale farmers and groups to buyers and connecting international agribusinesses to local ones,” she said.

According to her, the conference had recorded about 118 exhibitors, with a 45 per cent increase in exhibitor participation this year, adding that much sale of inputs such as machinery and equipment had been made.

The Northern Regional Minister, Shani Alhassan Shaibu, also commended the Agrihouse Foundation for organising the event over the years to connect farmers to various actors in the agricultural value chain.

He said despite the fact that agriculture was the backbone of the country’s economy, accounting for over 74 per cent of northern Ghana’s employment, it was unfortunate that the rich and diverse agricultural potential of the region remained untapped. 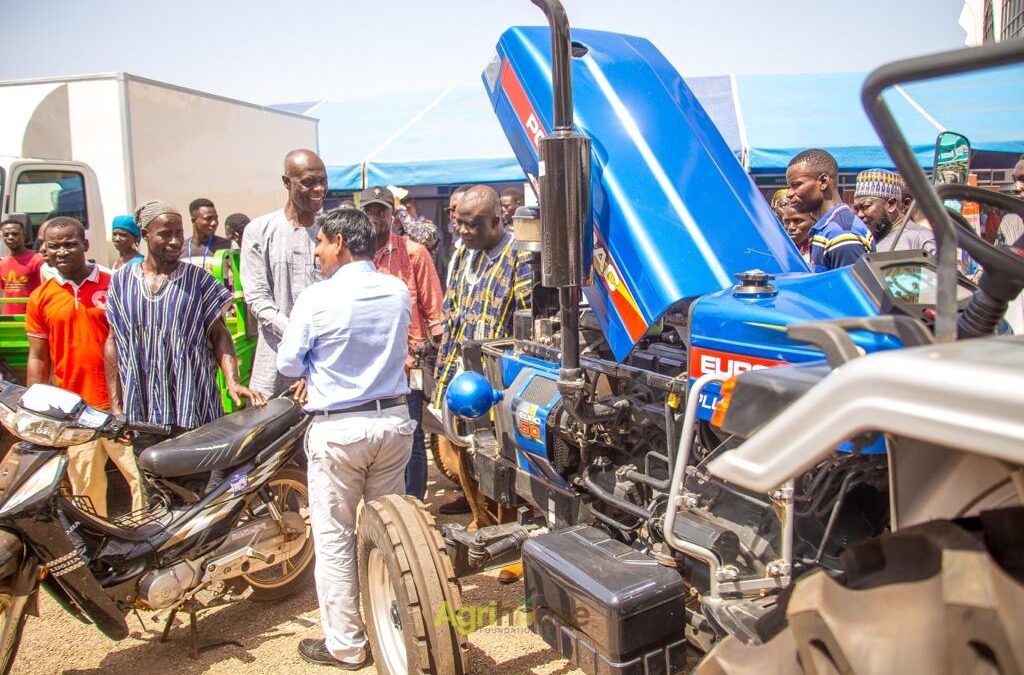 Over one thousand seven hundred and seventy-five (1775) value chain actors were recorded yesterday; made of several farmer groups across the districts, farmers with physical disability.

Cutting the ribbon and afterwards touring the exhibition stands in the company of other dignitaries, the Northern Regional Minister expressed satisfaction at the classes of exhibitors and service providers represented, “it is bigger than last year,” he noted.

The Northern Regional Minister, Hon. Alhaji Shani Alhassan Shaibu has called on stakeholders to invest intensively towards improving upon the state of market channels in the agricultural sector.

The Regional Minister stated that this will facilitate in combating and terminating agricultural challenges such as poor pricing, post-harvest losses, and mechanization, among others that arise when engaging middlemen in the agricultural market channel.

He reiterated that intensive investment in the market channels will salvage agriculture in the country.

Hon. Alhaji Shani made this call in his address to farmers and stakeholders in the agricultural sector at the 12th Pre-harvest Conference and Exhibition launch in Tamale.

“Now more than ever, we all need to invest in improving upon the state of our market channels within the agricultural sector. In doing so, we tackle and halt challenges including post-harvest losses, poor pricing for our farmers, mechanization and transportation challenges, and concerns that come with dealing with middlemen” He said.

The annual three days conference and exhibition organized by Agrihouse Foundation in partnership with other agribusinesses for the past decade has been a major market linkage event that has created opportunities for members and partners of the agricultural community via exhibitions, field and practical training, demonstrations, buying and selling and networking.

Speaking at the event, the Executive Director of Agrihouse Foundation, Alberta Nana Akyaa Akosa elaborated that the theme for this year’s conference and exhibition is focused on putting strategic measures in place to ensure that long-term collaborations and partnerships are established among farmers and agribusinesses, build and strengthen existing marketing linkages as well as create markets for agricultural related SMEs.

Madam Alberta explained that this year’s exhibition and conference have matchmaking sessions that will provide farmer-based organizations with platforms to negotiate and sign business deals with aggregators of cereals and legumes.

She disclosed that industrial agro-processors have already purchased huge metric tons of soya beans and maize from farmers at the ongoing exhibition.

The Deputy Minister for Food and Agriculture, Hon. Yaw Frimpong Addo in his address at the same event commended the efforts of Agrihouse Foundation in improving food security and nutrition across seventeen districts in the Northern Region via their 1 house 1 garden project.

He, therefore, urged more corporate bodies, development partners and local agencies to support the numerous efforts by Agrihouse Foundation to improve agriculture in the country.