TACKLING THE MENACE OF POST-HARVEST LOSES 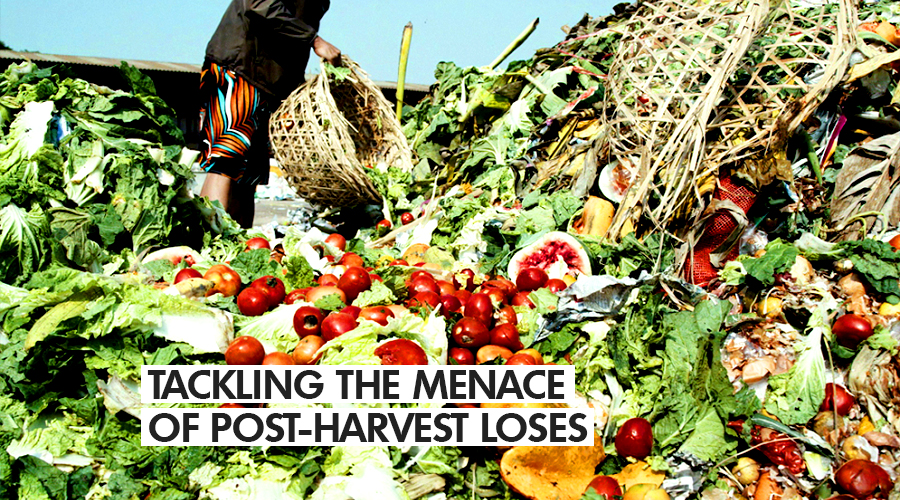 Meeting the food demand of a rapidly increasing global population is an enormous task which worryingly, is not helped by the niggling albatross of post-harvest loses.

With global population expected to reach 9.1 billion people by the year 2050, and about 70% extra food required to feed them, the issue of postharvest loses is one that requires an urgent and practical solution.
Tackling post-harvest losses is a sustainable solution to increase food availability, reduce pressure on natural resources, eliminate hunger and improve farmers’ livelihoods.

Postharvest losses consist of food loss across the food supply chain, specifically from harvesting of crop until its consumption by end users. The losses are generally characterized as weight loss due to spoilage, quality loss, nutritional loss, seed viability loss, and commercial loss.

Postharvest loss accounts for direct physical losses and quality losses that reduce the economic value of crop, or make it unsuitable for human consumption. In severe cases, these losses can be up to 80% of the total production.
Across the African continent, postharvest losses have been estimated to range between 20% and 40%, which is significantly high considering the low agricultural productivity in several regions of the continent. According to a World Bank report, sub-Saharan Africa alone loses food grains worth about USD 4 billion every year. For a continent that is still on the fringes of hunger and malnutrition, this analysis makes for grim reading.

Apart from the grim economic and social repercussions, postharvest losses also impacts negatively on the environment , as the agricultural inputs used to produce the lost food inevitably go to waste-just like the food.
Post-harvest loses doesn’t just happen. Indeed the stages in-between harvesting through to consumption are crucial to preventing or causing crop loses. Poor handling, lack of adequate processing facilities, and poor transportation are chief among the broad causes of post-harvest loses. In Ghana where crop harvesting is performed mainly manually using hand cutting tools such as sickle, knife, scythe, cutters etc., poor handling is easily one of the areas deserving of urgent attention, if food security will be achieved.

A study by the Africa Post Harvest Losses Information System in 2016 revealed that the country loses about 318 thousand 514 tonnes of maize annually during the post-harvest period. The three Regions of the north where poverty is predominant account for 34 thousand, 189 of the figure with the Upper West Region having lost 779 tonnes to post harvest management cases. In these regions the major crops which are often affected by perennial post-harvest losses include maize, sorghum, rice, groundnut, cowpea and vegetables.

Similarly, a 2016 study by Dr Bruno Tran, an expert in post-harvest losses management with the Africa Post-Harvest Losses Information System (APHLIS) estimates that Ghana loses about 318,514 tonnes of maize annually to post-harvest losses. This figure according to the study represents 18 % of the country’s annual maize production; with the Northern Region being the largest contributor with 20,411 tonnes annually, followed by Upper East Region and Volta Region which also contribute 13,000 tonnes and 8,983 tonnes respectively.

Upper West, Brong Ahafo and Central Regions are the least contributors with 778 tonnes, 734 tonnes and 636 tonnes respectively. The author identified failure of farmers to thoroughly dry harvested maize before storage as the reason for the huge incidences of maize loss particularly.

According to the report as much as 60 % of yam produced in Ghana, for instance, did not make it to the final consumer, adding that the level of losses occurring in maize production, ranged between 5-70 per cent. Between 11-27 % and 5-15 % of rice and millet/sorghum cultivated also never made it to the consumer.

To achieve success in the charge against post-harvest loses; farmers must be made to play a central role. Indeed without the involvement of farmers nothing meaningful can be achieved. Most farmers are notorious for being resistant to change and so a carefully structured capacity building forum to help local farmers appreciate and embrace new trends designed to halt post-harvest loses is a path worth threading.
Getting farmers to unlearn negative and timeworn practices which are largely responsible for aiding post-harvest loses will benefit both farmer and the economy. First the farmer will have more to sell at a competitive price while an improvement in rural folk livelihood will soar.

A wholesale improvement in Transportation across rural Ghana is also hugely important. If delicate and often perishable products like fruits and vegetables are able to reach the market without delay and attendant rough-handling, then the un-refreshing statistics made possible by post-harvest loses could well be reversed in the nearest future.
The emergence of expansive Storage facilities is also encouraging and must be improved on. Proper storage facilities will hold and preserve perishable goods until trucks and other haulage vehicles are brought in to cart these goods to the market. While at the market awaiting consumer purchase also, a good storage facility to hold these goods will ensure that goods remain in good condition for the journey from farm to consumer.
Stakeholder support cannot be underestimated in the quest to eventually alleviate the challenge of post-harvest loses. Indeed the monumental effort of stakeholders in the agric sector, particularly agric industry firms must be harnessed and used to help the crusade for an agric sector devoid of preventable post-harvest loses.
Ghana’s agric sector has a telling influence on the local economy and all hands are required on deck to help institute a lasting and effectual solution to the perennial post-harvest loses that has so consistently robbed the hardworking Ghanaian farmers of the reward for their sweat.

Though Ghana’s effort at achieving zero tolerance for hunger by 2030 seems well on course, post-harvest loses remains a lively threat which should be targeted and defeated, if we are to take the agric sector to deserving heights and consequently propel our economy towards unfettered growth.

The effort of Policy makers is crucial as specific initiatives aimed at tackling post-harvest loses is only possible through a calculated series of interventions that guarantees results.

Post-Harvest loss of precious crops is a challenge we can defeat summarily. But any compressively won battle is never achieved without a well-though out strategy. This is why we must burden ourselves with the noble task of proffering and initiating a comprehensive and efficacious solution to ensure that the marauding canker of post-harvest loses is stopped in its tracks.