BEEKEEPING AND THE URGENT NEED FOR INCREASED SUPPORT 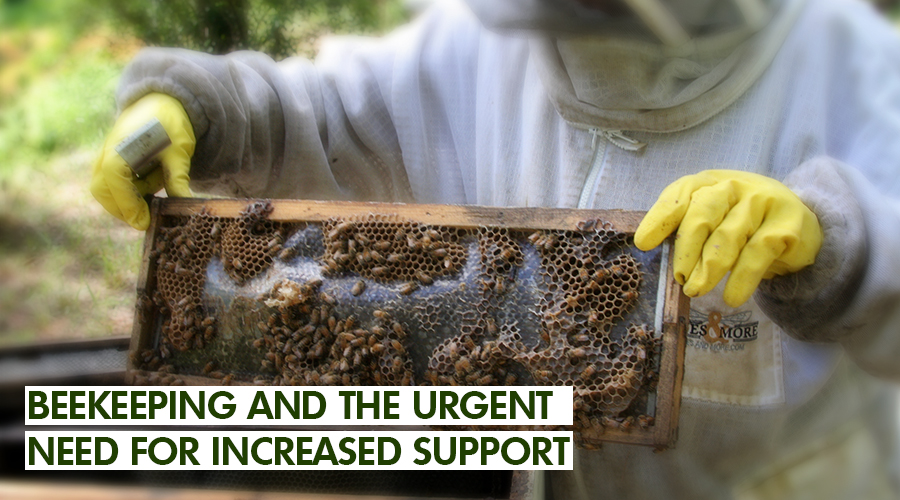 As Ghana explores more avenues for revenue generation to fuel national development, bee farming/keeping has emerged as an area with great economic potential for creating viable businesses and employment for many Ghanaians.
Bees are not only important for the production of honey, which is the world’s most popular natural sweetener; they are equally beneficial for their role in plant pollination. Without the bees’ natural role, food production would be at risk as bees pollinate approximately 35% of food crops consumed by humans.
The value of global trade of honey, besides other bee products, is estimated to be over $600 million, and in Africa, honey is produced in several countries with Ethiopia, Kenya, and Tanzania, leading as the largest honey producers on the continent.
Other products that bees produce that are in high demand include beeswax, which is widely used in both the skincare and cosmetic industries, as well as in shoe, furniture and candle manufacturing, propolis, which is used in medicines and cosmetic products, and honey bee venom, also known as apitoxin, commonly used as treatment for rheumatism and other joint diseases.

Origins
There are more than 20,000 species of wild bees. Many species are solitary (e.g., mason bees, leafcutter bees ( Megachilidae),carpenter bees and other ground-nesting bees). Many others rear their young in burrows and small colonies (e.g., bumblebees and stingless bees). Some honey bees are wild e.g. the little honeybee ( Apis florea ), giant honeybee (Apis dorsata ) and rock bee ( Apis laboriosa ). Beekeeping, or apiculture, is concerned with the practical management of the social species of honey bees, which live in large colonies of up to 100,000 individuals. In Europe and America the species universally managed by beekeepers is the Western honey bee ( Apis mellifera ). This species has several sub-species or regional varieties, such as the Italian bee (Apis mellifera ligustica ), European dark bee ( Apis mellifera mellifera ), and the Carniolan honey bee (Apis mellifera carnica ). In the tropics, other species of social bees are managed for honey production, including the Asiatic honey bee (Apis cerana).

Wild honey harvesting
Collecting honey from wild bee colonies is one of the most ancient human activities and is still practiced by aboriginal societies in parts of Africa, Asia, Australia, and South America. Gathering honey from wild bee colonies is usually done by subduing the bees with smoke and breaking open the tree or rocks where the colony is located, often resulting in the physical destruction of the nest.
Early forms of honey collecting entailed the destruction of the entire colony when the honey was harvested. The wild hive was crudely broken into, using smoke to suppress the bees, the honeycombs were torn out and smashed up — along with the eggs, larvae and honey they contained. The liquid honey from the destroyed brood nest was strained through a sieve or basket. This was destructive and unhygienic, but for hunter-gatherer societies this did not matter, since the honey was generally consumed immediately and there were always more wild colonies to exploit. But in settled societies, the destruction of the bee colony meant the loss of a valuable resource; this drawback made beekeeping both inefficient and something of a “stop and start” activity. There could be no continuity of production and no possibility of selective breeding, since each bee colony was destroyed at harvest time, along with its precious queen.

Protection for the beekeeper
One of the key activities in the life of a Beekeeper is collecting honey from often jealously guarded beehives. To achieve this, most beekeepers wear some protective clothing before attempting to retrieve honey. Typically, experienced beekeepers wear gloves, a veil and boots to guard against bee stings when invading a beehive.
Smoke is another significant line of defense for the beekeeper. Most beekeepers use a “smoker”—a device designed to generate smoke from the incomplete combustion of various fuels. Smoke calms bees; it initiates a feeding response in anticipation of possible hive abandonment due to fire. Smoke also masks alarm pheromones released by guard bees or when bees are squashed in an inspection. The ensuing confusion creates an opportunity for the beekeeper to open the hive and work without triggering a defensive reaction.

Composition of Bee colonies
In bee colonies, the queen is the only sexually mature female in the hive and all of the female worker bees and male drones are her offspring. The queen may live for up to three years or more and may be capable of laying half a million eggs or more in her lifetime. At the peak of the breeding season, a good queen may be capable of laying 3,000 eggs in one day, more than her own body weight. The queen is raised from a normal worker egg, but is fed a larger amount of royal jelly than a normal worker bee, resulting in a radically different growth and metamorphosis. The queen influences the colony by the production and dissemination of a variety of pheromones or “queen substances”. One of these chemicals suppresses the development of ovaries in all the female worker bees in the hive and prevents them from laying eggs.

Mating of queens
The queen emerges from her cell after 15 days of development and she remains in the hive for 3–7 days before venturing out on a mating flight. Mating flight is otherwise known as “nuptial flight”. Her first orientation flight may only last a few seconds, just enough to mark the position of the hive. Subsequent mating flights may last from 5 minutes to 30 minutes, and she may mate with a number of male drones on each flight. Over several matings, possibly a dozen or more, the queen receives and stores enough sperm from a succession of drones to fertilize hundreds of thousands of eggs. If she does not manage to leave the hive to mate—possibly due to bad weather or being trapped in part of the hive—she remains infertile and becomes a drone layer , incapable of producing female worker bees. Worker bees sometimes kill a non-performing queen and produce another. Without a properly performing queen, the hive is doomed.

Mating takes place at some distance from the hive and often several hundred feet in the air; it is thought that this separates the strongest drones from the weaker ones, ensuring that only the fastest and strongest drones get to pass on their genes.

Starting a Profitable bee farming venture
The standout advantage of venturing into bee farming is the relative ease from business conception to actualization stage. The venture is surprisingly easy to start and guarantees a steady stream of income with the application of the right technique.

Typically, a significant part of start-up capital for a beekeeping venture goes into the construction of boxes where the bees will build their hive. Once this is secured mostly by contracting a carpenter, a protective gear is the next vital tool needed.
Because of the increased aggression by bees when the beehive is heavy (loaded with honey), a smoke sprayer or dispenser becomes a must-have-especially as it not only serves the purpose of significantly reducing the aggression of bees by inhibiting their defense system.

Additionally when considering a stint in beekeeping it is important to ensure that beehive site is removed from residential dwellings. This is to minimize sting incidences; which have proved fatal in some cases.
After considering the aforementioned, the cardinal component which is obviously getting the bees becomes the next task for anyone venturing into the beekeeping. To court the attention of bees, one simply needs to buy some honey-especially the unprocessed one. Once the honey is available, a beekeeper could proceed to smear the honey within the boxes- and of course hang them in secure locations –preferably in tree and roof tops.
Depending on the swarm of bees that a beekeeper is able to attract, the average time before harvest is 6 weeks. At this point the bee keeper’s effort is often rewarded with enough honey to attract some good money.

Potential for Ghana
Ghana could become a leading producer of honey in Africa if necessary attention is channeled to the area. With healthy living crusaders advocating it as a healthier alternative for refined sugar and the increasing global demand for honey it is easy to see that Ghana has been presented with a fertile ground for job creation and foreign exchange.
Only in 2016, the industry’s global value, globally, was estimated at US$2.2billion, up by an average 27.1percent for all exporting countries since 2012, when natural honey shipments were valued at US$1.8 billion.
In the world of manufacturing, a lot of multinationals use honey to make cosmetic products such as skin care lotions, soaps, and lip balms, a lot of health conscious people are replacing sugar with honey in their tea and other meals.
This increasing demand for honey is a conspicuous testament that honey is a genuine money-maker that has to be taken advantage of. This is why a recent effort by The Ghana Beekeepers Association (GBA) to seek greater support from government is laudable and timely.

It would be recalled that the association, in February 2017, presented a proposal to the Ministry of Food and Agriculture which outlines in detail the level of investment needed to fully exploit beekeeping in Ghana.
A peek at the highly ambitious proposal presented to the Ministry of Food and Agriculture revealed that Ghana stood a chance of emerging as foremost producer of honey globally with an investment of GH¢1.62billion that will consequently yield as much as GH¢2billion for the country annually in just a matter of ten years.
With increasing global demand for honey one would only hope that the relevant authorities will leap in support of the budding beekeeping industry to ensure that the potential of this promising industry is fully harnessed for the benefit of Ghanaians.