TOWARDS A REVITALISED CASHEW PRODUCTION SUB-SECTOR 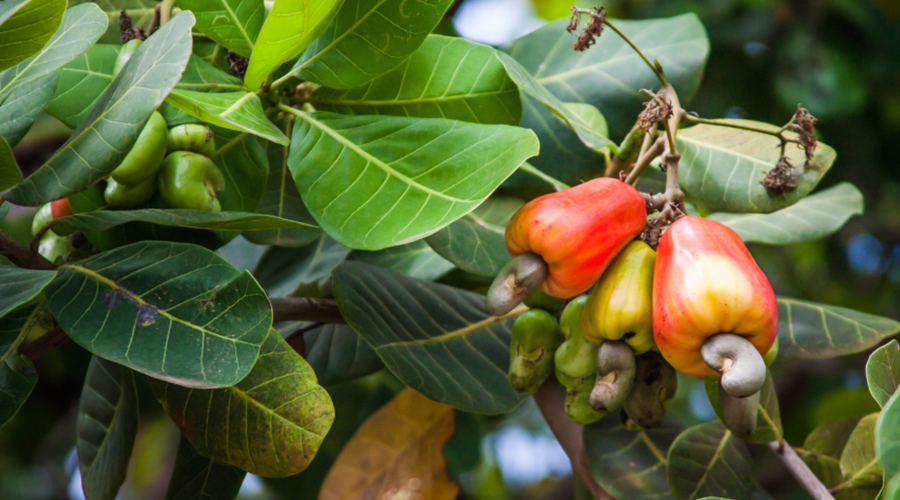 As Ghana actively seeks to diversify the country’s commodity export bill, it has become imperative that managers of the economy look in the direction of cashew.

The rationale behind this assertion is not far-fetched. Indeed cashew has in recent years leapt high in order of significance as far as Ghana’s primary export crops are concerned.

Cashew (anacadium occidental) cultivation in Ghana began in the 1960’s with sporadic plantings in the Central and Greater Accra Regions and later spread to the Brong-Ahafo, Northern, Upper East and Upper West Regions. Between 1970 and 1980, the industry suffered a transient set-back largely due to poor support mechanisms for the sub-sector.

Challenges like weak market structures, poor product pricing and insufficient knowledge in the growing and management of the crop caused the interest of several famers who had initially latched onto the cashew farming bandwagon to wane almost irreversibly.

The cashew crop typically requires a dry period of 4-6 months for flowering and fruit development. Cashew thrives well from sea level up to an altitude of 1,000m above sea level. Elevations above 1,000m are not suitable due to cooler temperatures which could cause considerable delay in flowering. The optimum temperature range for cashew cultivation is between 20ºC and 34ºC while the minimum temperature should not be below 18ºC with maximum not exceeding 38ºC.

In 2013, cashew made remarkable inroads to earn its place as Ghana’s second largest contributor to the non-traditional export crops bracket. That year cashew generated about US$170 million in the form of foreign exchange earnings to record what was a breakthrough year for the export crop.

The introduction and consequent cultivation of Cashew in Ghana has come a long way from when it emerged in the 1960s on a rather casual and intermittent scale where the crop was merely found in domestic backyards in the Central and Greater Accra regions.

After being introduced to the Brong-Ahafo, Northern and the Upper regions, cashew gradually gained ground and is today an essential export commodity with monumental worth.

Through the collective effort of expert groups like the Ministry of Agriculture’s Agro-Forestry Unit, the Forestry Commission, the Ghana Export Promotion Council, the Africa Cashew Alliance, the African Cashew Initiative (which enjoys funding from the Bill and Melinda Gates Foundation), and other key stakeholders, the sub-sector has slowly but surely emerged as a potentially cardinal foreign exchange earner for Ghana.

Today, Ghana’s cashew industry directly engages at least 300,000 farmers on a full time basis, along with a range of secondary employment avenues for over 200,000 people (who work as agents, transporters, shippers etc).

With regards to export, which strategically drives the industry, cashew is estimated to have generated US$244 million for the Government from a total export of 163,000 metric tonnes in 2016 alone.

Earlier this year, President Nana Akufo-Addo launched the 10-year Cashew Development Plan aimed at diversifying Ghanaian agriculture. The move which is commendable and perhaps long overdue saw the president fulfill the wish of several agric-industry personalities who had long advocated for such a measure.

He further stated that as part of renewed efforts to improve cashew yield for the country , the Ghana Export Promotion Authority has  commissioned a cashew mass spraying exercise in Wenchi, involving the provision of GH¢1.6 million for the spraying of some 30,000 hectares of cashew plantation.

These initiatives, the President added, form an integral part of the Cashew Development Plan which will seek to improve research methods, introduce appropriate production and processing technologies, as well as develop marketing strategies, amongst others, along the cashew production value chain.

Speaking at the launch of the plan at Wenchi in the Brong Ahafo Region, the President said the initiative will hugely improve the livelihood of farmers in the country.

“I reiterated my commitment to assist in diversifying Ghanaian agriculture transforming among others cashew, into a major cash crop and foreign exchange earner for Ghana,” President Akufo-Addo stated.

He tasked the Ministry of Food and Agriculture and the Ghana Export Promotion Authority to incorporate, policies and interventions that would create additional businesses and job opportunities in the areas of storage, transport, and packaging of cashew, which will ensure that cashew farmers earn higher incomes.

While the Government’s support for cashew cultivation is refreshing, it remains to be seen if the renewed determination will be sustained. If the government manages to do this, it will help diversify the country’s economy and generate adequate foreign revenue to facilitate development.

Though fraught with a myriad of challenges, the recent performance of the cashew sub-sector is eye-catching. According to a recent report captured by “thefinderonline.com”, Ghana raked in $981 million ($981,158,000) as the value of total exports of cashew in 2016. This meant the country emerged as the number one exporter of cashew in–shell for the year 2016.

A report posted on the web portal of Ghana Export Promotions Authority (GEPA) said this represents 43.8% of total global exports of cashew in-shell. Major market destinations for Ghana’s cashew in 2016 are Vietnam, where total exports amounted to $533 million, and India, consuming $445 million worth of Ghana cashew.

Although Ghana’s hold on the Vietnamese market is remarkable, threats of competition from mainly Tanzania are real, the report said.

The report noted that over the last decade, Ghana’s cashew has principally been exported to India.

While the potential in the Cashew sub-sector is huge, there is still a lot of work to be done. First, a perennial issue such as lack of access to cashew nuts by local farmers must become a thing of the past-and quickly!

This will help reverse the unfortunate trend where less than 10% of the country’s production is processed locally despite an inherent capacity to do so and thus add value before export.

Currently, only 10% of African raw cashew nuts are processed (shelled) locally. The vast majority are exported in-shell to some of the world’s main hubs for cashew shelling in India and Vietnam.

From all indications, it’s more prudent for Ghana to consider processing all its production as this will help sustain the industry locally. Indeed, checks indicate that the country is losing some GH₵100 million a year for not processing enough cashew locally.