IRRIGATED AGRICULTURE AS A PATH FOR INCREASED FOOD PRODUCTION 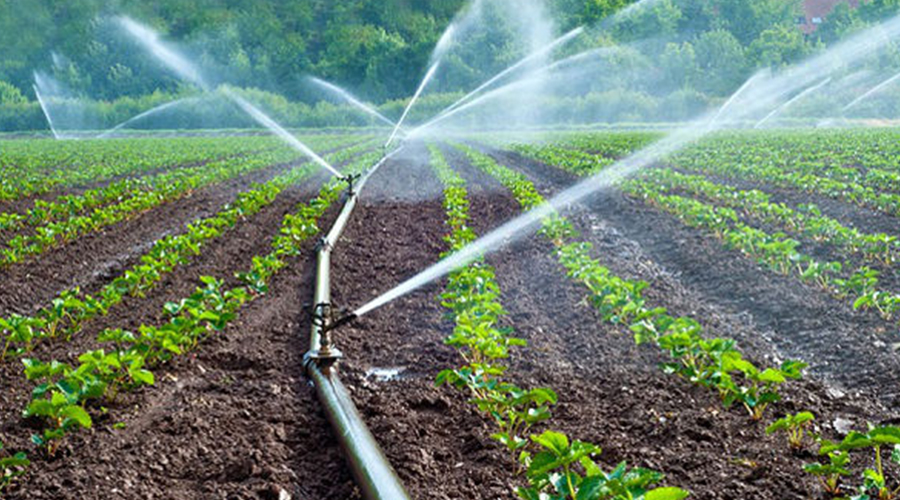 Droughts and other types of unseasonable weather pose risks for farmers. Under these conditions, irrigation development offers the promise of greater food security and the rural-area development by ensuring yearlong agricultural production.
Despite considerable potential for development and the emphasis placed on irrigation development in many plans, less than two percent of the total cultivatable area in Ghana is irrigated. Moreover, even within this small area, researchers lack a clear understanding of where in Ghana different types of irrigation infrastructure are used and to what effect.

Less than a third of the estimated total irrigated land in Ghana lies within 22 well-known public schemes, and not enough is known of the location, development and management of the informal irrigation schemes that account for the remaining two-thirds of total irrigated land. Although donors and policymakers express interest in providing new funds for irrigation development, the lack of reliable data on where irrigation currently exists, trends in its development, and opportunities and constraints within formal and informal schemes undermines consensus about how to build on what already exists in the sector.

With rhetoric’s for a Ghana beyond aid gaining momentum, the agricultural sector must lead the way in achieving this national goal, as agriculture employs more than 50 percent of the total economically active population.

Cultivable land is still abundant as only 38.9 percent of total agricultural land area is currently cultivated. Yet productivity of existing farmland is generally low and uncertain, because of prevailing traditional low-input, shifting-cultivation farming systems and dependence on rainfall.

According to FAO, Ghana is endowed with sufficient water resources for irrigation-based intensification. Estimates of Ghana’s irrigation potential are wildly divergent, ranging from 0.36-1.9 million hectares to slightly more than 33,000 ha under irrigated cultivation.

Despite irrigation’s considerable potential and the emphasis placed on it in recent plans, the proportion of potential irrigable land actually under irrigation is insignificant. In addition, the performance and productivity of existing irrigation schemes, particularly those that were publicly developed, are generally low.

For Ghana, the need to take irrigation farming a notch high is long overdue. A simple technique like harvesting and accumulation   of rainwater for reuse by farmers is one that we have to quickly put in place for our hard working farmers to take advantage of. Ethiopia, Senegal and Guinea-Bissau, have already led the way in similar innovative techniques that we can borrow a leaf from in developing ours.

The government’s One Village, One Dam initiative is a welcome development that can’t wait longer if the huge potential in agriculture will be realized for   the benefit of the country. The times the rains begin presents a challenge for farmers. Many of our farming practices rely heavily on rain-fed agriculture so the One Village One Dam principle will be very helpful in helping Ghana make a pronounced mark.

The One Village One Dam policy will upgrade farmers from having to constantly depend on rainfall to ensure their farms are watered to more effective and convenient irrigation systems.

The introduction of One Village One Dam Policy will undeniably increase food productivity and security, meet agricultural sector growth targets and fast-track the country’s efforts towards achieving the Sustainable Development Goals (SDGs) particularly the goals on eradication of extreme poverty and hunger.

When completed, the project would not only serve as a storage for harvested rain water for agricultural activities mostly in the dry season, It would also help to mitigate the perennial challenge of flooding which affects most communities whenever the spillway of the Bagre Dam in Burkina Faso is opened, leading to loss of human lives, animals and the destruction of farmlands and other valuable properties.

Another significant irrigation infrastructure that the government has committed to executing is theTorgorme irrigation project.

It has been projected that the 2,000-hectare irrigation project will generate about GH¢28million yearly after completion. Direct farm income per year after completion of the project and commencement of production is expected to increase from the current, GH¢1,653 per hectare to GH¢14,253 per hectare.

Speaking at the sod cutting of the project, President Akufo-Addo noted that a minimum of 17 communities with a combined population of over 6,000 would have direct access to water supply that would increase the earnings of small holder farmers through double-cropping under irrigated conditions, and the creation of jobs in addition to the completion of various agri-businesses down the value chain.

The project, which has been described as a game changer in the transformation of Ghana’s agriculture sector into an international one, is being undertaken by OM Metals/SPML (JV). It will be supersized by Messrs WAPCOS Limited in association with Messrs AGRARTEC with HMD Africa as the leading supplier of all machinery and equipment for the project.

The rejuvenation of the project has received $50million in addition to an earlier $100million committed six years ago from the World Bank and USAID as part of a larger nationwide irrigation project spearheaded by GCAP. The project covers three irrigation schemes including the KLBIP at Torgorme. The other two are the Kpong Irrigation Scheme and the Tolon Irrigation Scheme in the North.

After rapid economic growth averaging 10% every year between 2004 and 2014, Ethiopia has emerged as an engine of development in Africa.
And there are no signs that ambitions for further growth are fading. This is clear from the government’s blueprint to achieve middle-income status – or gross national income of at least US$1006 per capita – by 2025. This would see a rapid increase in per capita income in Ethiopia, which is
currently US$783 , according to the World Bank.

Ethiopia’s growth has been propelled by at least two factors: the prioritization of agriculture as a key contributor to development and the fast-paced adoption of new technologies to boost the sector.

A third of Ethiopia’s GDP is generated through agriculture, and more than 12 million households rely on small-scale farming for their livelihoods.
One of the drivers of growth in the agricultural sector has been the expansion of irrigation. The country has seen the fastest growth in irrigation of any African country. The area under irrigation increased by almost 52% between 2002 and 2014.

This was achieved by investing in the sector, and by harnessing technology to expand irrigation to farmers who traditionally relied on rainfall to water their crops. This boosted productivity and income for farmers by helping them extend the growing season and become more consistent in their production.
Meanwhile, only 6% of arable land is currently irrigated across the whole of Africa. This means that there’s huge potential to expand irrigation and unlock economic growth.

These factors are highlighted by a new report from the Malabo Montpellier Panel. The panel convenes experts in agriculture, ecology, and nutrition and food security to guide policy choices by African governments. The aim is to help the continent accelerate progress towards food security and improved nutrition.
The panel’s latest report analyses progress – and highlights best practice – in irrigation in six countries. These include Kenya, Mali, Morocco, Niger and South Africa. Other African countries can draw lessons from the report’s insights.

The report identified a number of common factors in countries where significant progress has been made to expand irrigation, including key policy and institutional innovations.

In the case of Ethiopia, one of the main reasons for its success is that agriculture and irrigation have been featured on the Ethiopian policy agenda since 1991. In addition, specialised institutions have been set up with clear commitments to maximise the benefits of water control and irrigation systems.
In addition, the government has invested in the sector and has plans to continue doing so. It aims to allocate US$15 billion to irrigation development by 2020.
The investment is expected to deliver a number of returns. These include: more efficient use of fertilizers reduction in the seasonal variability in productivity and better yields from irrigated crops grown.

Another major area of development has been the collection of data. This is an invaluable asset that allows for careful monitoring and management of resources such as water, especially in times of drought.
In 2013, Ethiopia’s Agricultural Transformation Agency began mapping more than 32,400 sq kms to identify water resources, particularly shallow groundwater, with the potential for irrigation development.

The final results of this mapping in 89 districts revealed nearly 3 billion cubic metres of water at a depth of less than 30 meters. This could allow approximately 100,000 hectares of land to be brought under irrigation, benefiting 376,000 families.

Finally, Ethiopia has harnessed the value of a full range of irrigation technologies. These have ranged small-scale interventions to large infrastructure.

A joint project between the Ethiopian Bureau of Agriculture, local extension officers, and an NGO called Farm Africa, for example, helped women and young people adopt small-scale irrigation. This was part of an initiative to increase their incomes and improve their nutrition. Overall, the project reached nearly 6,400 women and landless people. The irrigation project also benefited 700 farming families.

In order to have food and income security and to attain broader development goals, countries need to make sure that all levels of government are engaged in planning and implementation. The private sector and farming communities also need to be involved to expand irrigation.

The experience of Ethiopia and other countries leading on irrigation can help Ghana develop country-specific strategies to effectively take irrigation to scale. The benefits of doing so, such as enhancing on-farm productivity and income, and improving resilience and livelihoods, are transformational.