CLIMATE CHANGE AND THE CONSEQUENCE FOR AGRICULTURE 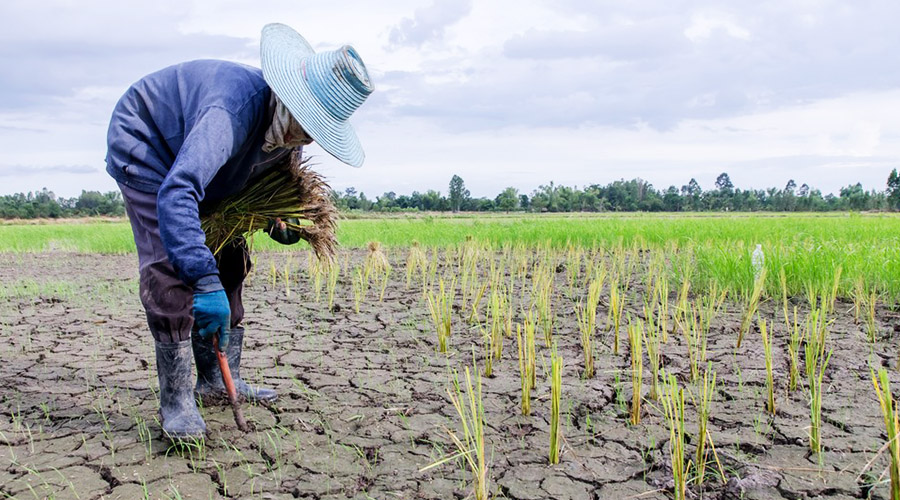 Since time immemorial, hunger has managed to stay in vogue despite the colossal benefit of agriculture. Despite plentiful harvest that is often recorded around the world, a myriad of factors have ensured that a significant number of people worldwide have hunger staring them in the face.

Today, the world is rallying a united front to fashion out a practical solution to address this challenge – along with expanding agricultural land and intensifying crop yields – the world is also relying on global agricultural trade to meet the nutritional demands of growing world population.

While this is a welcome development, human-induced climate change has recently come to the fore as a budding threat to world food security.

According to recent studies, climate change will affect global markets by reshaping agricultural trading patterns. Some regions may not be able to battle climate impacts on agriculture, in which case production of key commodities will decline or shift to new regions.

Increasingly, negative impacts of climate change on agricultural production have preoccupied farmers and decision-makers across the world. The concern is increasingly shared by governments including those most hostile to the advancement of climate change mitigation.

Even the United States, which has opted out of the Paris Agreement , acknowledged at last year’s G7 summit that climate change was one of a number of threats to “our capacity to feed a growing population and needed to be taken into serious consideration”.

The UN median population projection suggests that the world population will reach some 10 billion in 2050. Between 2000 and 2010, roughly 66% of the daily energy intake per person, about 7,322 kilojoules, was derived from four key commodities: wheat, rice, coarse grains and oilseeds. However, the most recent UN report on food security and nutrition shows that world hunger is on the rise again and scientists believe this is due to climate change.
Agricultural production is significantly affected by climate change. This is because climate change and the implementation of a carbon mitigation policy have different effects on regions’ agricultural production and economy.
Recently, it has emerged that, regardless of the carbon policy scenarios, Sub-Saharan Africa will become the greatest importer of coarse grains, rice, soybeans and wheat by 2050. This significant change in Sub-Saharan Africa imports is driven by the fact that the largest increase in human population by 2050 will occur in this region, with a significant increase in food demand.

A recent report published by the European Commission about the challenges of global agriculture in a climate change context by 2050 highlights that
…emission mitigation measures (i.e. carbon pricing) have a negative impact on primary agricultural production […] across all models.
However, the report does not mention the technological costs to buffer (or adapt to) the effect of climate change on agriculture.
Changes in the agricultural system due to climate are inevitable. It is time to create a sense of urgency about our agricultural vulnerabilities to climate change, and begin seriously minimizing risk.

Climate change is a global phenomenon. This means Ghana, like other countries of the world have to join in the collective fight to mitigate the often expansive effect of climate change.

In Ghana, the effects of climate change are becoming too obvious to miss. Irregular rain pattern and a consequent drop in crop yield are some of the signs that have confirmed the significant impact of climate change in Ghana.

But in a country where more than 60 per cent of farmers are illiterates, it will take some effort to drive home the need to give up certain traditional practices in favour of progressive best practices that have proven apt in many instances.

The Ghanaian media is an undeniable ally of the agriculture industry. At the height of the malignant galamsey menace that literally threatened the best of the country’s arable land, the media stood firm, pushed leadership to act and monitored progress to ensure that the wanton destruction of the Ghanaian environment was checked.

The important role played by the vibrant media make it an indispensable partner for the onslaught to mitigate the effects of climate change, particularly on agriculture.

The local agric industry is highly portentous, with a direct influence on the country’s GDP. This means that no effort should be spared if we will continually savour the monumental benefits derivable from agriculture.

As many current media footages portray, the menacing effect of climate change appears like a force in full swing.in Ghana we must be thankful that we have not suffered any climate induced mishap of national proportion. This should however spur us to put in place effectual policies and programs that will help improve the environment, while keeping potentially devastating effects of climate change at bay.

Agriculture represents more to Ghana than an industry. It is the lifeblood of Ghana and must therefore be protected from within and without. Currently, climate change has proven to be a threat that requires rapt attention, It therefore behooves on all agric- industry stakeholders, particularly the government to work collectively with others to ensure that agriculture is not swept into an abyss by the marauding wind of climate change.

While at it, we must also make effort to inculcate best practices from around the world that have proven efficacious. This way, we can lessen the effect of climate change and safeguard the local agriculture industry to ensure more jobs, food and a consequently boost the economy.