GIVE ATTENTION TO WOMEN IN AGRICULTURE-AGRIHOUSE FOUNDATION TELLS GOV’T 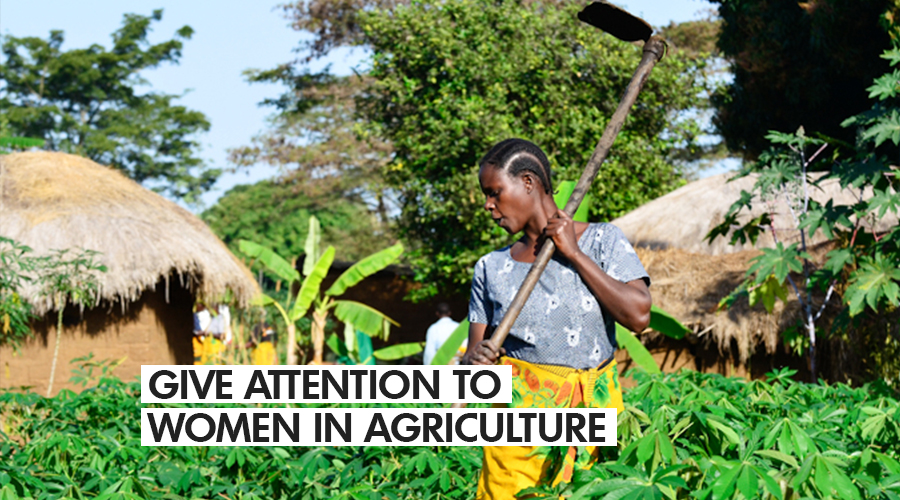 The Executive Director of Agrihouse Foundation, Alberta Nana Akyaa Akosa has called on government to pay more attention to women in agriculture so as to bridge the productivity gap that exists between women and the male farmers.  She said despite the strive women are making in the agric sector, the existing inequality in the sector has left women behind in Ghana due to lacked of attention

Madam Alberta noted that, women in agriculture do not receive adequate support on the part of government as compared to their male counterparts, and so are not able to compete effectively in the sector despite their immense contributions

She said statistics, says about 70 percent of agricultural workers and 80 percent of food producers as well as 15 percent of basic food processors in the country are women.

“Your Excellency, Ladies and gentlemen, to reinstate agriculture as the mainstay of the Ghanaian economy, certain critical issues needs to be addressed. Key among these is the prevalent inequalities that abound in the sector. It is an obvious reality that women for instance do not receive adequate support in their quest to compete with their male counterparts despite their immense contribution to the sector” she said

“Statistics show that about 70% of agricultural workers, 80% of food producers and 15% of those who process basic food, are women. These women also undertake 70 to 85% of the rural marketing” she added

Madam Alberta indicated that, women according to findings make up to about 43 percent of the agricultural labour force globally, 50 percent in sub-Saharan Africa and about 52 percent in Ghana.

She added that, women contribute between 60-80 percent of food consumed through the contribution of labour for weeding, plants and harvesting and processing of agro-products that result in 70 percent of food production in Ghana but are still hampered by the lack of support, proper education, improved technology, fair markets structures as well as other productive resources.

”At Agrihouse Foundation, we are staunch believers of in the capabilities of women in agriculture. We therefore strongly advocate that government pays serious attention to women in agriculture so as to bridge the productivity gap that exist between them and their male counterparts;’’ she stated. She urged government to make agriculture more attractive to the youth and also provide financial support as well as access to market for small holder farmers in the country.

He explained that, agriculture is a bedrock for every nation’s economic development and should therefore be prioritized regardless the cost

He also said the government of the Nana Addo led administration was ready to invest more into the agric sector to bring a positive transformation in the area, and mentioned the planting for food and jobs, one district, one factory, the one village, one dam among others as some policy interventions that are aimed at improving agriculture in the country

Mr Saeed described the theme for this year’s event “Agribusiness in the Northern Ghana, the future starts now” as fascinating and timely as it coincided the visions and policies of the day’s government that are geared towards eliminating poverty through agriculture

Agrihouse Foundation is a non-governmental agricultural capacity building, innovation and project management organization, with a special focus on changing the perception of, and consciously shaping the conversation on agriculture through the promotion of people-impact programs, projects and initiatives, targeting students, women, farmers, farming associations, agribusinesses and the entire actors within the value chain.

The NGO’s initiatives focuses  on Mentorship, Empowerment, Leadership Grooming, Best Practices, Training etc. that leads to effecting positive change in the mind, field, economy  and translate to the community in which we operate or live in.

Agrihouse drive and passion also lies in Agric Exhibitions, Trade Promotions, Research, communications, concept creation and investor relations, which we have successfully stamped our foots in, over the years. We are data-driven and have in-depth knowledge and understanding of the agric sector, economy, politics and public life, media overview and its dynamics

The 2018 edition of the Pre-harvest Conference and Exhibition gave farmers the opportunity to learn, share and discuss issues affecting in the Sub-Saharan region, especially, Ghana

The event was structured into  platforms where diverse services linked to the agric sector, such as seed production, fertilizer, finance, fisheries, storage, machinery, livestock, and packaging & processing, ICT among others interacted for mutually beneficial ends.

Participants for the three days were taking through practical and engaging sessions at the conference to enable them gain deeper insights into best practices as well as  how to take full advantage of the numerous opportunities in the agric sector for growth.

In presents were the Farmers, the academia, politicians, the media and the general public