JAPAN – AN AGRIC NATION THRIVING DESPITE THE ODDS 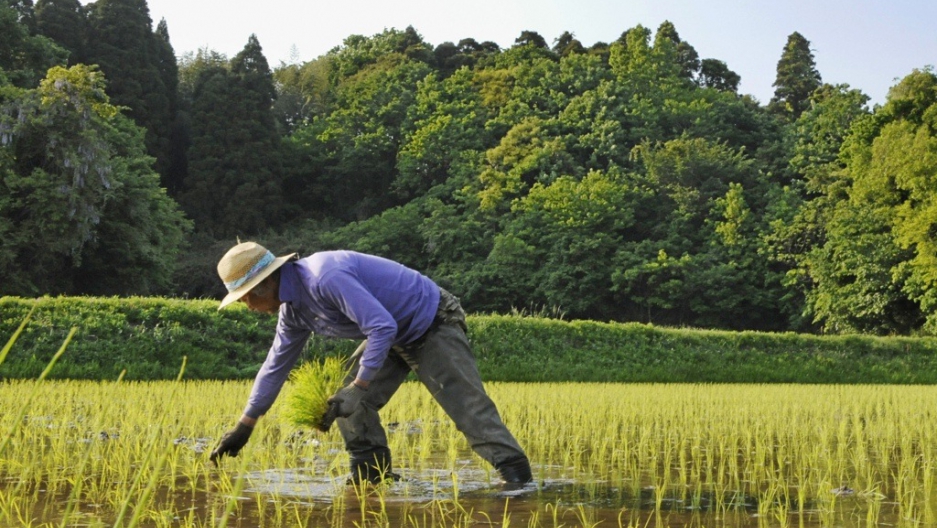 Crop production is vital to Japan notwithstanding the Asian country’s sparse arable land (13% of the total area) and the highest degree of industrialization in Asia. Steep land (more than 20°) has been terraced for rice and other crops, carrying cultivation in tiny patches far up mountain sides.

Despite this obvious snag in the countries wheel of progress, Japan has demonstrated an uncommon resilience that today, her agriculture sector is enjoying a steady rise that experts believe could see the country rival other traditional agricultural heavyweight like China and Brazil.

Agriculture exists in every part of Japan, but is especially important on the northern island of Hokkaido, which accounts for 10% of national production. Since World War II (1939–45), modern methods, including commercial fertilizers, insecticides, hybrid seeds, and machinery, have been used so effectively that harvests increased substantially through the 1970s.

Overproduction of rice, as a result of overplanting and a shift to other foods by the Japanese people, led the government in 1987 to adopt a policy of decreasing rice planting and increasing the acreage of other farm products. For many years, the government restricted imports of cheaper foreign rice, but in 1995 the rice market was opened to imports, as the government implemented the Uruguay Round agreement on agriculture.

As a result of the US-occupation land reform, which began in late 1946, nearly two-thirds of all farmland was purchased by the Japanese government at low prewar prices and resold to cultivators on easy terms. By the 1980s, nearly all farms were owner-operated, as compared with 23% before reform. A more telling trend in recent years has been the sharp growth in part-time farm households. Farmers are aging, and 77% of farm income is derived from other sources, such as industrial jobs. Although agriculture accounts for only 2% of GDP, about 10% of the population lives on farms.

Rice is by far the most important crop in Japan and planted on the best agricultural land. Other crops grown in Japan include soybeans, wheat, barley, and a large variety of fruit and vegetables.

Japan’s Ministry of Agriculture, Forestry and Fishery (MAFF) has a Crop Production branch that collects agricultural data at the prefecture level, monitors crop development using weather data and satellite imagery, and publishes crop estimates. Rice forecasts are made in August and October, with final estimates coming out in December. Production data for minor crops (wheat, soybeans) are collected after the harvest and published in December.

The quality of the impressive automobiles and household electronics that the world has come to acknowledge japan for is reflected in the countries insistence on quality agricultural produce. Consumers in Japan are highly sensitive to quality issues in their food, demanding fresh, uncontaminated, and attractive products. In Japan, many of the convenience store chains are very important outlets for moderately priced pre-cooked meals. These are prepared at central locations and delivered daily (sometimes more often), and the quality is very high.

Niigata, Japan’s largest rice-growing prefecture strongly promotes the locally-grown rice and is branding itself as a center of farming and fine cuisine. Last year, Niigata opened an innovative, high-tech education center designed to teach children (and adults) about farming, cooking, and nutrition, and the city sponsors food festivals each year.

The per capita consumption of rice has been dropping for decades due to urbanization, adoption of western foods, and an aging population, but it remains the most important grain in their diet. The Japanese strongly prefer to eat the native Japonica (sticky) rice.

Like many of the world’s leading agricultural nations, japan has prioritized innovations that are unique to the country’s agricultural development needs.

Top of the pile of these indigenous innovations is a robotic wolf designed to protect farms from natural pests and maximize harvest.

According to a recent BBC report initial tests have proved successful and could be set for production in commercial quantities in a matter of weeks. 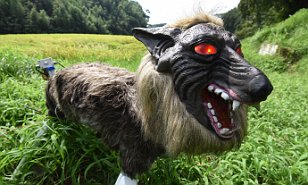 The “Super Monster Wolf”, as it has been christened by the designers responsible is a 65cm-long, 50cm-tall robot animal sheltered with realistic-looking fur, as well as massive white fangs and blinking red eyes.

In July last year, designers in the Japanese city of Kisarazu crafted the “Super Monster Wolf” to help keep wild boar away from rice and chestnut crops. The robots modus-operandi is such that when it detects an oncoming animal, its eyes light up and it starts to howl; scaring-off potential crop pest in the process.

Its manufacturers say the robot wolf which will cost around $4,840 will be powered by solar-rechargeable batteries and has a range of howl noises so that animal threats don’t become accustomed to it.

The Japan Agricultural Cooperatives in acknowledging the importance of the new invention pointed that crop losses has remarkably shrunk in regions where the “Super Monster Wolf” has been station since preliminary trials began late 2017.

Before its introduction, The Japan Agricultural Cooperatives remarks that previously, farmers around the country’s Kisarazu were hapless against wild boars that destroyed local farms with reckless-abandon and ensured farmers perennially lost a substantial part of their crops prior to harvest.

The “Super Monster Wolf” device has an effective radius of about one kilometer; a feature that makes it more effective than an electric fence.

Another interesting way the Japanese are foraying into agricultural excellence is through an effective use of the internet. Though the country is challenged by an ageing farmer population and youth apathy for agriculture, there seems to be a ray of hope for the country’s agriculture as some youth have begun latching on to an agric-blogging fad that serves to tap into the incredible influence of the internet.

In a move that has been hailed as the solution that will make agriculture in japan more appealing to the youth,  an increasing  horde  of youngsters have taken advantage of the internet and are on the path to creating an attractive image of agriculture that will reverse the youth apathy trend in the Asian country.

Though the youth don’t fancy traditional peasant farming that the older Japanese population had practiced for centuries, blogging about agriculture and selling agricultural produce to online customers is proving attractive to the youth who are consistently seeking innovative ways of attracting more traffic to their personalized online platforms by giving potential clients helpful information on the products they sell through the conduit.

Local authorities are pleased with the development and are extremely hopeful that they can take advantage of the unprecedented youth interest in agriculture to fill the void expected to be created by its current aging farming population who have sustained the countries agriculture since time immemorial.

The Japanese have taken a high tech approach to agriculture as they have with everything else. The country is miles ahead in biotechnology; they grow their rice with an amazing variety of mini-machines, including mechanical rice transplanters and harvesters, helicopter spraying, vinyl sheeting, concrete banked paddies and massive use of chemical fertilizer.”

The Japanese have produced a tomato plant that bears 10,000 tomatoes with the aid of a rotating-lens system that filters out harmful sun rays and focused beneficial rays where they are needed most. One tomato plant at the Tsukuba Science Expo in Japan produced 16,897 individual tomatoes.

The modernization of rice paddy agriculture includes consolidating small fields into large ones, replacing open canals with underground drainage pipes, installing pumps to pump in water and periodic draining of the paddies. These changes have made the paddies easier for farmers to work.

Japan has been producing the square watermelons since the 1980s. They are grown in tempered glass cases and sell for around $80 a piece.

Biofarms in which temperature, humidity and light are controlled by computers permits managed growth of plants and vegetables. In Mie Prefecture, farmers are using remote-controlled cameras and instruments that measure temperature, daylight hours and water content of the soil to determine whether trees need special assistance such watering, to help fight pests and diseases and choose the right time to pick crops.

Mebiol Inc. is marketing a hydrogel film in which seeds can be planed and seedlings can be grown with very little water. The material can retain large amounts of water. The film is only 0.06 millimeters thick and allows water and nutrients to permeate through it but blocks viruses and germs. The technology is particularly useful in desert environments.

Mito-based Pattruss Inc. has recently also developed a pyramid-shaped plastic package that doubles the shelf life of lettuce and other agricultural products. Patented in 2007, the packaging is already widely used in southern Europe where people like a lot of fresh greens in their salads.

Japan is a great ally of the Ghanaian agricultural sector with a lengthy history of support. Through a grant assistance, which started in 1981, the government of Japan has contributed to the Ghanaian government’s efforts to mechanize agriculture and ensure food security, particularly rice production.

Recently, the Embassy of Japan handed over agricultural machinery under Japan’s Grant Assistance for underprivileged farmers in the country.

A statement issued by the embassy indicated that a total Grant which is ￥330,000,000 (approximately 9.7 million Ghana Cedis) had been disbursed alongside  machinery comprising 77 agricultural tractors with matching implements, 49 power tillers, 20 rice threshers, 11 rice reapers and six rice mills.

The resilience of japan en route to its current status 0n the world agricultural scene is full of practical lessons for Ghana to emulate. Indeed if a country with as little arable land as japan is able to stand out in agriculture, then Ghana should be doing a great deal than what we currently have achieved in agriculture.

The brilliant innovation that employs the use of a wolf-like robot to scare off crop pest is particularly interesting and must serve as a challenge to our local industry to train young Ghanaians with technological expertise to create such simple yet realistic agri-solutions that will propel agriculture in Ghana towards development.

It is obvious from the achievement of countries like japan, that the future of agriculture is innovative technology. We must embrace this reality and work towards encouraging our youth particularly, to use the internet for productive initiatives akin to what their Japanese counterparts are doing. This could prove a panacea for the perennial challenges of unemployment and youth apathy for agriculture.