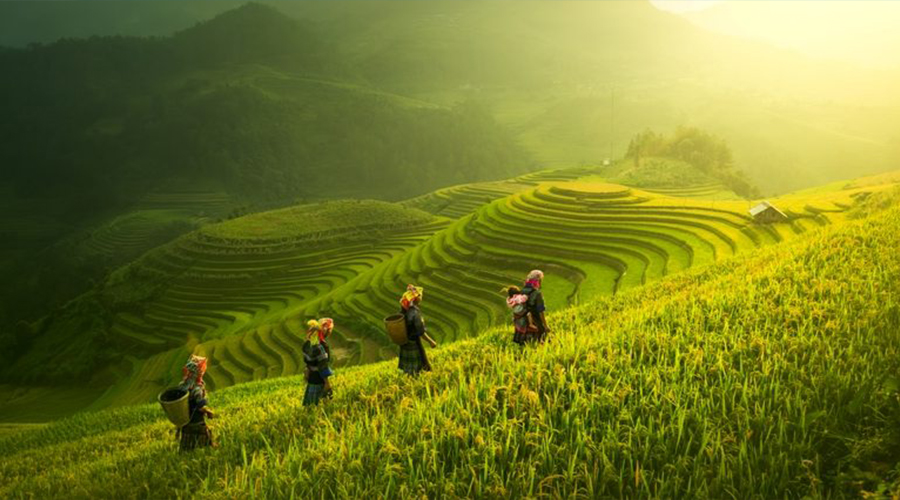 India is famous for gifting the world the knowledge and charisma of Mahatma Gandhi as well as the exhilarating movies of Bollywood.

As well as being largely known around the world for the aforementioned, the country has made a significant leap in the last two decades that today, she is considered an agricultural great worthy of emulation.

India’s agriculture is composed of many crops, with the foremost food staples being rice and wheat. Indian farmers also grow pulses, potatoes, sugarcane, oilseeds, and such non-food items as cotton, tea, coffee, rubber.

Agriculture is crucial to India’s burgeoning economy- and statistics point to even better days for the country in the near-future. Over 58 per cent of the rural families in India depend on agriculture as their primary means of income. The Indian food industry is poised for huge growth, increasing its contribution to world food trade every year due to its immense potential for value addition, particularly within the food processing industry. The Indian food and grocery market is the world’s sixth largest, with retail contributing 70 per cent of the sales.

During 2017-18 crop year, food grain production is expected to reach a record 277.49 million tonnes-a figure that has seen a marginal improvement from 275.68 million tonnes   only a year ago.

India has been the world’s largest producer of milk for the last two decades and contributes 19 per cent of the world’s total milk production.

India is emerging as the export hub of instant coffee which has led to exports of coffee increase 17 per cent in calendar year 2017 to reach US$ 958.80 million. Tea exports from India reached a 36 year high of 240.68 million kgs in CY 2017.

India topped the list of shrimp exporters globally in 2016 with exports of US$ 3.8 billion which are expected to double to US$ 7 billion by 2022.

Agricultural export constitutes 10 per cent of the country’s exports and is the fourth-largest exported principal commodity. Agricultural exports from India reached US$ 28.09 billion during April 2017-January 2018 with exports of basmati, buffalo meat reaching US$ 6.19 billion and US$ 6.59 billion, respectively.

India is the largest producer, consumer and exporter of spices and spice products. Spice exports from India grew by 6 per cent year-on-year between April-September 2017 to US$ 1.37 billion.

According to the Department of Industrial Policy and Promotion (DIPP), the Indian agricultural services and agricultural machinery sectors have cumulatively attracted Foreign Direct Investment (FDI) equity inflow of about US$ 2.02 billion and US$ 466.31 million, respectively, during April 2000 to December 2017. The food processing sector attracted FDI of US$ 8.37 billion in the same period.

Some major investments and developments in agriculture are as follows:

The first mega food park in Rajasthan was inaugurated in March 2018.

Sugar production in India is expected to reach 27.2 million tonnes in 2017-18 season (October-September).

A loan agreement of US$ 318 million was signed between the Government of India, Government of Tamil Nadu and the World Bank in December 2017 for the ‘Tamil Nadu Irrigated Agriculture Modernization Project’ through which is expected to benefit around 500,000 farmers in the state.

Some of the recent major government initiatives in the sector are as follows:

In March 2018, the Government of India extended the urea subsidy to the farmers till 2020 with the aim of ensuring supply of urea at statutory controlled prices. Urea subsidy for 2018-19 is estimated at Rs 45,000 crore (US$ 6.95 billion).

As of March 2018, the Government is working on a plan to provide air cargo support to promote agriculture exports from India.

The Government of India is going to provide Rs 2,000 crore (US$ 306.29 million) for computerisation of Primary Agricultural Credit Society (PACS) to ensure cooperatives are benefitted through digital technology.

Around 100 million Soil Health Cards (SHCs) have been distributed in the country during 2015-17 and a soil health mobile app has been launched to help Indian farmers.

With an aim to boost innovation and entrepreneurship in agriculture, the Government of India is introducing a new AGRI-UDAAN programme to mentor start-ups and to enable them to connect with potential investors.

The Government of India has launched the Pradhan Mantri Krishi Sinchai Yojana (PMKSY) with an investment of Rs 50,000 crore (US$ 7.7 billion) aimed at development of irrigation sources for providing a permanent solution from drought.

The Government of India plans to triple the capacity of food processing sector in India from the current 10 per cent of agriculture produce and has also committed Rs 6,000 crore (US$ 936.38 billion) as investments for mega food parks in the country, as a part of the Scheme for Agro-Marine Processing and Development of Agro-Processing Clusters (SAMPADA).

The Government of India has allowed 100 per cent FDI in marketing of food products and in food product e-commerce under the automatic route.

A new platform for selling agricultural produce named e-RaKam has been launched by the Government of India and will operate as a joint initiative of Metal Scrap Trade Corporation Limited and Central Railside Warehouse Company Limited (CRWC).

India is expected to achieve the ambitious goal of doubling farm income by 2022. The agriculture sector in India is expected to generate better momentum in the next few years due to increased investments in agricultural infrastructure such as irrigation facilities, warehousing and cold storage. Furthermore, the growing use of genetically modified crops will likely improve the yield for Indian farmers. India is expected to be self-sufficient in pulses in the coming few years due to concerted efforts of scientists to get early-maturing varieties of pulses and the increase in minimum support price.

Indian irrigation infrastructure includes a network of major and minor canals from rivers, groundwater well-based systems, tanks, and other rainwater harvesting projects for agricultural activities. Of these, the groundwater system is the largest. Of the 160 million hectares of cultivated land in India, about 39 million hectare can be irrigated by groundwater wells and an additional 22 million hectares by irrigation canals. In 2010, only about 35% of agricultural land in India was reliably irrigated. About 2/3rd cultivated land in India is dependent on monsoons. The improvements in irrigation infrastructure in the last 50 years have helped India improve food security, reduce dependence on monsoons, improve agricultural productivity and create rural job opportunities. Dams used for irrigation projects have helped provide drinking water to a growing rural population, control flood and prevent drought-related damage to agriculture.

Organic agriculture has huge historic ramifications for India. Having fed India for centuries, the country has made sure that a budding organic farming sector is in place and thriving despite the widespread use of synthetic agrochemicals in the country currently.

India has 6,50,000 organic producers, which is more than that of any other country. India also has 4 million hectares of land certified as organic wild culture, which is third in the world (after Finland and Zambia ).

Although India has attained self-sufficiency in food staples, the productivity of its farms is below that of Brazil, the United States, France and other nations. Indian wheat farms, for example, produce about a third of the wheat per hectare per year compared to farms in France. Rice productivity in India was less than half that of China. Other staples productivity in India is similarly low. Indian total factor productivity growth remains below 2% per annum; in contrast, China’s total factor productivity growth is about 6% per annum, even though China also has smallholding farmers. Several studies suggest India could eradicate hunger and malnutrition and be a major source of food for the world by achieving productivity comparable with other countries.

Pesticide use and crop safety

The importance of pesticides for agriculture is enormous because they are considered as one of the major tools to protect crops and increase the yield. In In India today, the crop protection products sector is a fast developing industry, which is open to innovation. The pesticides market is also propelled by factors like growing population, and the need for minimizing crop damage. The opportunity lies in developing and executing innovative farming solutions that address the needs of the Indian farmer with very low landholding size, resources and knowhow available to him. India has to ensure food security for population of 1.21 billion while facing reduction in cultivable land resource. With increasing population, demand for food grains is increasing at a faster pace as compared to its production. This necessitates the use of pesticides or crop protection chemicals in a judicious manner within the confines of a regulatory framework of the country.

The Crop protection industry in India has been facing major challenges like influx of counterfeiting of crop protection solutions, which affects food production, the health of farmers and consumers, and the overall environment. In India, spurious pesticides constitute 25 % of the pesticide market. The other vital issues of pesticides industry such as prevention of use of spurious pesticides, quality standards, testing, review of use of pesticides, to create awareness about judicious use of pesticides among the farmer community are supervised by the Department of Agriculture and Cooperation(DAC).

Ghana and India share ties that have endured nearly a century. This longstanding relationship with India has seen Ghana benefit so much –particularly in the area of support for her vibrant agricultural sector.

Last year Ghana signed a number of partnership agreements with India to boost the supply of agricultural machinery, credit advancement to farmers and scientific cooperation.

The agreements which involved other African countries keen to develop their agriculture were hinged on the supply of farm machinery and adequate training on usage and maintenance.

In his remarks, State Minister of Agriculture, Chimanbhai Dharamshibai Shaparia , said “We feel the areas identified for cooperation could raise agricultural productivity in Africa and we want to ensure that capacity building is given full priority.”

Mr. Birender Singh identified areas of agro processing, agric mechanization as well as services and maintenance as the capacities that the Indian government could help Ghana improve.

His Excellency Birender Singh gave the indication during a courtesy call on the Minister of Food and Agriculture, Dr. Owusu Afriyie Akoto.

The forgoing is only a microcosm of the huge investments that India continues to make in the Ghanaian agri sector.

One would hope that Ghana will take full advantage of the enormous support being received and use same to propel the Planting for Food and Jobs initiatives of government which has the potential of propelling our agriculture to stellar heights.