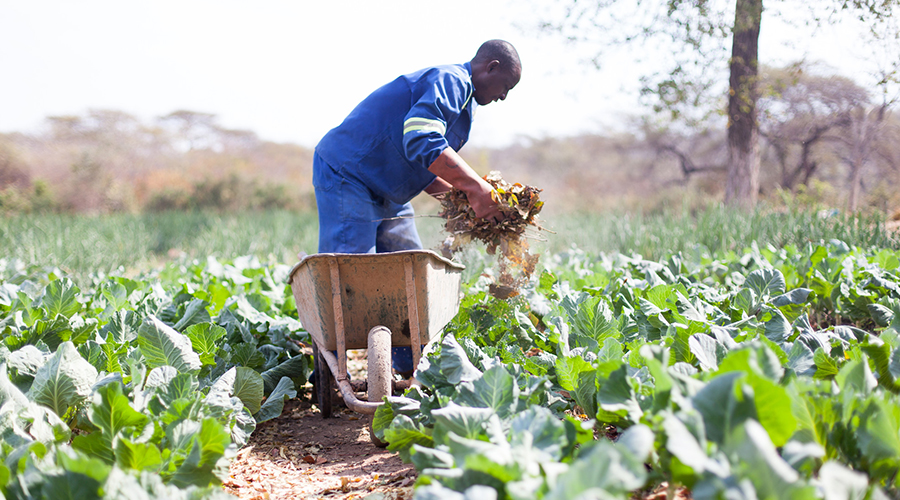 Ghana and the Netherlands have a long-standing relationship that dates back nearly a century. The relationship with the European country has blossomed and continues to show promises in the areas of sports, business, education and notably, agriculture.

In Europe where the Netherlands is geographically situated, the country is a beacon of excellence in innovative agriculture. Ghana on the other hand, is enormously blessed with an agricultural sector that is not short of eye-catching potential, however, unlike her Dutch counterpart, Ghana has a long way to travel if the country will fulfil the vast potential inherent in her agricultural sector.

While the relationship between the two countries continues to grow, Ghana particularly, could borrow a leaf from the Netherlands who despite being a small country has established itself as a cynosure of agricultural brilliance.

The Netherlands is a small yet densely populated country with a population of about 1,300 inhabitants per square mile. According to a myriad of literature which have documented   the country’s incredible rise to the top of the agricultural enterprise, at the onset of the country’s national drive for agriculture, many cynics were of the opinion that the country was bereft of the resources which were thought to be necessary for success in any full scale agricultural endeavour of national proportion.

The Netherlands brushed aside the wet-blankets; and would you believe it? Today the Dutch have made their country the words second highest exporter of food as measured by value, beaten to top spot of that record by the United States which amazingly has 270 times its landmass!

Viewed from the sky, the Netherlands is said to look like “a disjointed patchwork of intensely cultivated fields most of them, tiny by agribusiness standards, punctuated by bustling cities and suburbs”; a description that lays further claim to the fact that the countries success in agriculture is down to sheer determination of a people bound by the common cause of wanting to provide the world with enough wholesome food with little or no harm to the environment. Despite the countries relatively small arable land space, the country through a resolute approach has turned to greenhouses which have been instrumental to its giant strides in agriculture.

Holland’s greenhouse complexes provide an extraordinary view of the incredible work the country has done in the area of agriculture. With some covering an upwards of 175 acres of earth, the country is now literally strewn with greenhouse edifices; which is a big demonstration yet of the venerable commitment of the Dutch to agriculture.

The greenhouse concept which involves sheltering and tending plant crops in climate controlled enclosures is a wonderful innovation that has made a country not famous for the best soil quality, the world’s leading exporter of a fair weather reliant agricultural produce like tomatoes.

Aside her exploits in the cultivation of tomatoes, Netherlands holds the enviable record of being the world’s top exporter of potatoes and onions and the second largest exporter of vegetables overall in terms of value. In fact, more than a third of all global trade in vegetables seeds originates from the Netherlands.

The journey of the Netherlands towards success in agriculture is not only tied to wonderful innovations. The country also boasts an array of impressive hardware technology that are relied on by farmers countrywide to collectively grow the tons of agricultural produce that the country ships out to feed the rest of the world.

About Twenty years ago the Netherlands made a national commitment akin to the “Planting for Food and Jobs” which Ghana is currently banking the much anticipated revitalization of her agricultural sector on.

Like the planting for food and jobs, the Netherlands rolled out her national agriculture agenda with a goal of “Producing Twice as Much Food Using Half as Many Resources.”

Having laid the marker for a national policy, the Dutch took full advantage without hesitation-the result is the lofty heights the country occupies in the League of Nations who provide the world’s wholesome agricultural produce.

Through its innovative agrifood technology, the Dutch agrifood sector has carved a niche for itself as one that prioritises safe, healthy food that is produced in strict adherence to respect for nature and the environment.

Today, the Dutch agricultural sector is cardinally focused on sustainability rather than mere profit making. The sector through this approach has managed to establish itself as a source of safe food that is produced with outmost respect for the landscape and the environment.

Ghana has plenty to learn from the Netherlands. If there is any part of the “Netherlands agricultural success story” that catches the eye, it has to be the start point; where the country made a conscious commitment to tow a certain path in its quest to make a mark in agriculture.

Every journey they say begins with a step; but even more crucial is the kind of step and the commitment to making sure that successive steps culminate in a sustained trajectory that guarantees success.

It is heart-warming when in acknowledging the crucial role played by the “Producing Twice as Much Food Using Half as Many Resources “, the Ghanaian version of “Planting for Food and Jobs “comes to mind.

The Dutch story is testament that Ghana may just be on the right path with a flagship policy that aims to guarantee food security and address mass unemployment.

To succeed however, it is important that stakeholders in the industry come on board to own the policy. Like the Dutch example, we must have a national commitment to make the policy work; especially since it proposes a clear-cut direction that aims to tackle the huge challenge of food security and mass unemployment.

Ghana has massive potential waiting to be tapped, and the example of the Netherlands is a fine demonstration of how we can transform our agriculture sector to make it a pride not only for the country but for the African continent.

While we consider the exploits of the Dutch fixatedly, the refreshing reality is that the Netherlands have not hidden its desire to help Ghana succeed in agriculture. The annals hold records of backing received from the Netherlands since independence. This support has not dried up by any means as the Netherlands continues to contribute significantly to efforts aimed at propelling the local agricultural sector.

Support for agric in Ghana

Though Ghana’s relationship with the Netherlands is on many fronts, the European nation’s contributions to Ghana are too big to ignore. Annually the Netherlands commits millions of dollars to the Ghanaian agricultural sector through projects and other support mechanisms. Consequently, the efforts of the Netherlands have been lauded serially by politicians as well as industry players.

The Ghanaveg project which is one such effort of the Netherlands seeks to increase productivity ,facilitate efficient markets, link farmers and other value chain operators to the Dutch private sector with the aim of improving the fortunes of the local Ghanaian agricultural   sector.

A good example is worth emulating any day, and the Netherlands provides just that. From humble beginnings the country has managed success that is befitting of the adjective ‘incredible’

The onus therefore lies on Ghana to take full advantage of the healthy relationship that exists between herself and the Netherlands to emulate the impressive achievement of the European country in agriculture.

While Ghana may find the technological sophistication of the Netherlands an uphill task to climb in the present, the national commitment exhibited by the Dutch is one that we cannot afford to ignore.

The much publicised “Planting for Food and Jobs “gives us a fantastic avenue to shine; and what we must do is embrace the policy regardless of political sentiments to ensure that Ghana emerges the winner by the time the policy is exhaustively implemented by government.